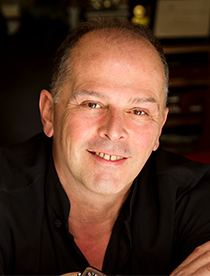 Carlo Poggioli studied and graduated in stage and costume design at the Istituto D'Arte and The Accademia di Belle Arti in Naples.

After completing his studies, Poggioli worked in Rome as assistant for some of the most important Italian costume designers such as Gabriella Pescucci, Piero Tosi, Maurizio Millenotti, for films directed by: J. J. Annaud's "The Name of the Rose", Terry Gilliam's "The Adventures of the Baron Munchausen", Federico Fellini's "The Voice of the Moon", Martin Scorsese's "The Age of Innocence" (Oscar 1993 Best Costumes), Franco Zeffirelli's "Sparrow" and more.
He also worked alongside Ann Roth as assistant for "The English Patient" (Oscar 1996 Best Costumes) and, as associate designer, for "The Talented Mr. Ripley" directed by Anthony Minghella.

Carlo Poggioli’s work in the last decade include "Silk" directed by Francois Girard for which he won the Canadian Academy Award, the Prix Genie Award and the JUTRA Award for best costume design.
He was also nominated for the Silver Ribbon for "Lecture 21" directed by Alessandro Baricco.
Further work also include "Miracle at St. Anna", directed by Spike Lee and "Ninja Assassins", directed by James McTeigue.

In 2019 he moved to Morocco for the costumes of "Waiting for the Barbarians" a film based on the famous novel of 2003 Nobel Prize winner J.M. Coetzee directed by Ciro Guerra ("Embrace of the serpent" and "Birds of passage"), starring Johnny Depp, Mark Rylance and Robert Pattinson.
Again, with Paolo Sorrentino, and still with costume designer Luca Canfora, for the sequel of tv series "The New Pope", with John Malkovich, Jude Law, Silvio Orlando, Cecile de France, Sharon Stone and many other international actors.
In post-production the film "The Last Planet", directed by Terrence Malick, with Ben Kingsley, Mark Rylance, Joseph Finnes, shot in various locations in the Mediterranean basin.